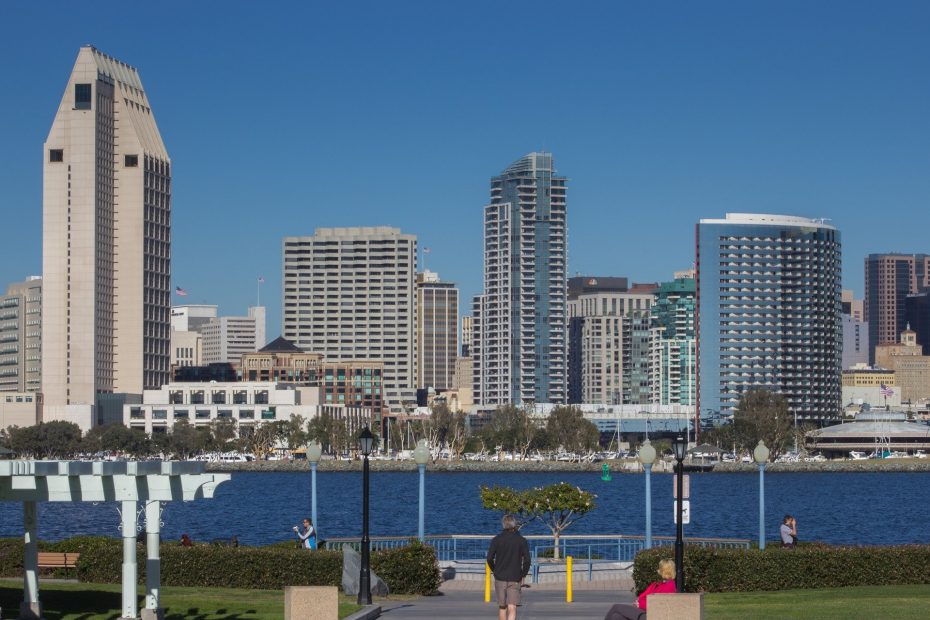 San Diego is the second biggest city in California with a population of around 1.4 million people. It is often overlooked as a tourist destination due to the popularity of Los Angeles and San Francisco, but San Diego is a beautiful city with a breathtaking skyline that is worth seeing. The Californian city also has a ton of scenic spots offering breathtaking views of the town’s cityscape. Therefore, to give visitors and inhabitants of the town the opportunity to see the city from its best angle, we’ve put together a list of the best skyline viewpoints in San Diego, California.

The Tuna Harbor Park is a waterfront park located next to the USS Midway Museum. Its proximity to Downtown San Diego makes the park easy to access from hotels frequented by tourists. The park offers a beautiful view of the San Diego skyline, but also contains the Unconditional Surrender (the kissing statue) and the National Salute to Bob Hope and the Military, so it’s the perfect scenic viewpoint for anyone wanting to visit military-related monuments, with the museum next to the park.

Located next to Petco Park and the Gaslamp Quarter’s entrance, the Embarcadero Marina Park offers a scenic view of Downtown San Diego and the Coronado Bridge. It’s located within a walking distance from downtown and even has basketball courts, so you can sit down and enjoy San Diego’s skyline after playing a basketball game with your friends.

Bayview Park is on Coronado island, so it’s located on the other side of the San Diego Bay. Yes, it is obviously far from the city center, but Coronado is still a beautiful place often visited by tourists, so anyone visiting the city should at least go on the island once. Because of the bay between Bayview Park and San Diego’s skyline, the view is clear and the water makes the skyline look even better, especially at night. Therefore, Bayview Park viewpoint should be on everyone’s list when they visit San Diego, especially photographers.

Due to its 820 feet (250 meters) elevation, Mount Soledad is a great place to see San Diego and its skyline. Located in La Jolla, Mt. Soledad is within a 20-minute drive from downtown, but the view is worth it. If you are a cyclist, Mt. Soledad is a popular cycling spot due to long steady climbs and low traffic, so you’d have the perfect opportunity to cycle while enjoying San Diego’s beauty. On the top of the mount, where you’ll see a big cross and the National Veterans Memorial, there will be bench where you can sit and see San Diego from afar. Just make sure not to come when there’s too much smog to have a great view of the whole city and its surroundings.

Mission Trails Regional Park is within a 20-minute drive from Downtown San Diego. Cowles Mountain, with its 1600 feet (490 meters) summit, is the highest point in San Diego, so it offers a great view of San Diego from afar. If you like hiking, the regional park is absolutely worth it, as you’d be a lot closer to nature and other mountains than you would have been if you stayed in the city. Anyone wanting a break from the city should visit this viewpoint and hike Cowles Mountain. Visit the regional site’s website for more.

Cabrillo National Monument is located on the Point Loma Peninsula. From this viewpoint, you can see a view of San Diego’s harbor and skyline from afar. When it’s not too cloudy, you can also see Tijuana and have a clear view of the Pacific Ocean. This viewpoint is one of the best in San Diego because of its fantastic view, but also because of the multiple things you can do near the lookout point. You can visit the visitor center, take a look at Cabrillo Statue, visit the famous Old Point Loma Lighthouse and a lot more. Visit the park’s website for more.

Finally, the best viewpoint in San Diego is, in our opinion, Centennial Park. Located on Coronado Island, the Centennial Park offers the best view of San Diego because of the bay between the buildings and the park, which gives people a clear view of the city’s skyline. At night, you can even see the reflection of the buildings’ lights on the water, which gives people a breathtaking view and awesome pictures. Centennial Park is also located next to the Coronado Ferry and its dock, so visitors can enjoy San Diego from a different point of view, without walking for a long time. Multiple shops and restaurants are also close to the viewpoint, so it is really the best area for anyone wanting to have a great time. Coronado Island is also home of the legendary Hotel Del Coronado and its fantastic beach, so going on Coronado is a must for anyone visiting the beautiful city of San Diego, California.

In short, San Diego has one of the best skylines on the west coast and there is no shortage of viewpoints to enjoy it. Make your trip to San Diego complete by visiting at least one of the viewpoints featured in this article. Visit our map of scenic lookouts to find other viewpoints in the city or in other cities in the world and make sure to reach out to us if you know a breathtaking view that isn’t featured on our website.