The 9 Best Scenic Viewpoints in Seattle 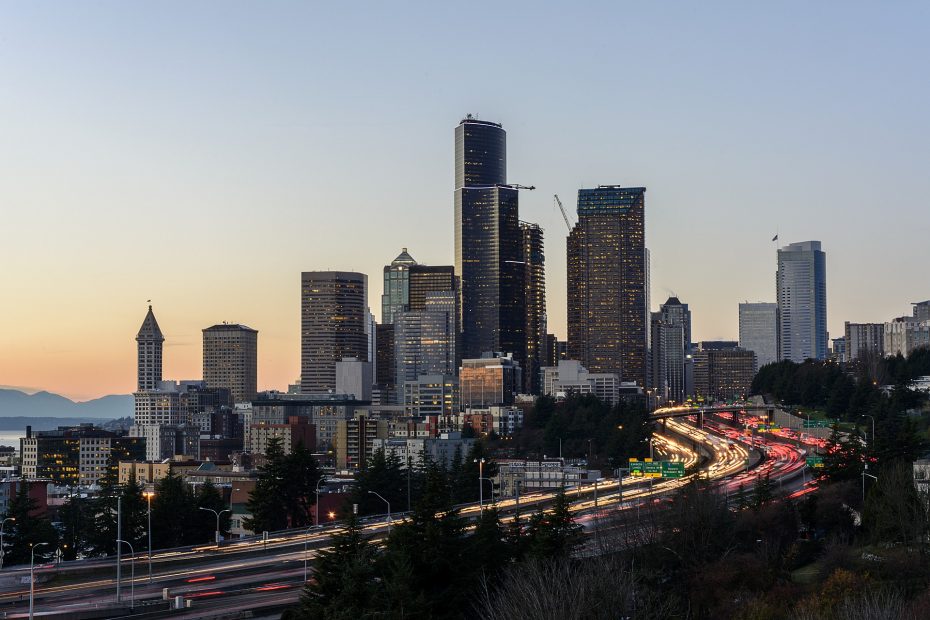 Seattle, with its metropolitan area’s population of 4 million people, is by far the biggest city in Washington state. Therefore, its skyline is also the biggest, and the prettiest, with more than 50 buildings over 330 feet (100 meters). Seattle has the second biggest cityscape on the west coast (only behind Los Angeles), so seeing it should be a priority if you’re visiting or living in the city and want to enjoy a breathtaking view. To make sure you’ll enjoy the finest view of Emerald City, we’ve made a list of the nine best scenic viewpoints in Seattle.

Located next to downtown Seattle, the Bell Street Pier Rooftop Deck offers one of the best views of Seattle, from an angle that is really different from other viewpoints on this list. Due to its proximity to Downtown, you could easily take a break from the busy city center and relax while enjoying a view of Seattle’s buildings, bridges, and Elliot Bay.

If you’re visiting Bainbridge Island or its surroundings, you might want to stop at Pritchard Park (or Creosote Park Bench). The park is located on the other side of Elliot Bay, at about a 1.5-hour ferry trip from Downtown Seattle. It is indeed far from downtown, but the view is absolutely worth it, especially for photographers, as this lookout point offers a view of the whole skyline from afar.

As it is located on a small peak, Hamilton Viewpoint Park provides a really unique scenery of Seattle’s skyscrapers. The viewpoint is separated from the city by Elliot Bay, but is closer to Downtown than Pritchard Park, so you can expect a fantastic and clear view of the city at any hour. At night, you might even see the buildings’ reflection on the bay. The park is at a 30-minute drive from Downtown, but the area offers a lot of fun places to visit, such as Alki Beach, so the drive is absolutely worth it.

If you want to see a spectacular panorama, Kerry Park is the place to go. Located in a residential neighborhood next to Downtown Seattle, Kerry Park provides a view of the famous Space Needle, Seattle’s skyline, Elliot Bay and even Mount Rainier in the background. It’s the perfect place to walk or relax on a bench while the sun is setting. It is also an iconic picture spot, where you can get 2 of the most famous attractions of the region in one shot: Mount Rainier and the Space Needle.

Smith Tower is a 484-foot tall skyscraper (148 meters) located in Downtown Seattle. The building was built in 1914 and has since then welcomed people to its observation deck. It’s the perfect place to relax and enjoy an amazing view of the city when the weather isn’t good outside or when you feel like having a drink, as the observation deck also has a bar. Visit the observation deck’s website to find more about it and buy tickets.

Sky View Observatory is an observation deck at Columbia Center in Downtown Seattle. From there, you can see the city, Mount Rainier, Mount Baker, Elliot Bay, the Olympics Mountains and more. At 902 feet, it’s the highest public observation deck in the Pacific Northwest, so it’s definitely a place you should check out when visiting the city. You can also have a drink while enjoying the view, as there is also a bar at this observatory. Make sure to check out their website for more information about the lookout point and its tickets.

Dr. Jose Rizal Park is a public park next to Downtown Seattle on the west slope of Beacon Hill. From this viewpoint, you can see Seattle from a different angle, but still have a clear view of the city because of the highway in front of it. Also due to the highway, the park is an amazing place for photographers, as it gives them the opportunity to take pictures of the skyline while having car headlights adding a really great touch to the photos.

Located on the north shore of Lake Union, at about a 15-minute drive from Downtown Seattle, Gas Works Park is a great place to relax and have a picnic with friends or family. The park contains remnants of the sole remaining coal gasification plant in the USA. It is a popular place to walk and have a picnic, as it has multiple areas to do so. Due to Lake Union, you can see Downtown and the Space Needle really well.

Finally, we’ve named the Space Needle the number one scenic viewpoint in Seattle, Washington. The 605 foot-tall structure was built in 1962 for the World’s Fair. It has since then become one of the most recognizable landmarks in the world. The Space Needle offers 360-degree indoor and outdoor panoramic views of the city and, as it’s not located directly in Downtown, photographers are also able to fit a large part of Downtown in one frame only. Because of that, the iconic building is probably the best viewpoint of the city. Visit the Space Needle website for more information.

Seattle is an awesome city, with plenty of skyscrapers and landmarks such as Mount Rainier, the Space Needle, and Elliot Bay, so if you live in the city or plan to visit it, you should absolutely take time to go see a bunch of scenic lookouts on this list. Make sure to comment if we forgot to add viewpoints to our list and check out our scenic lookout map for more!