The Best Scenic Viewpoints in Albuquerque 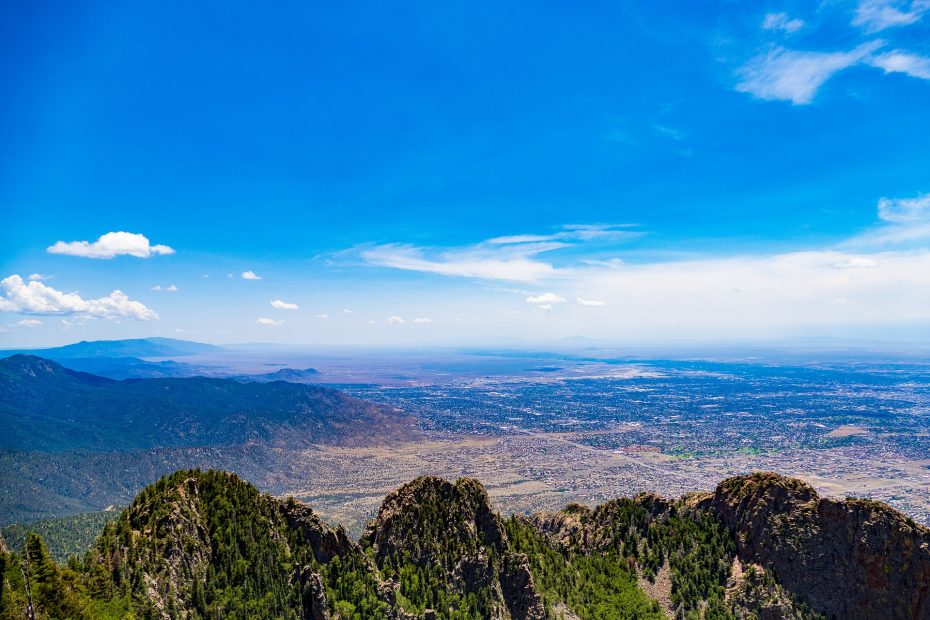 Albuquerque is New Mexico’s biggest city with a population of approximately 600 000 people. The city’s proximity to the Sandia Mountains makes it a popular destination for people looking for outdoor activities, but the city itself has undoubtedly the best skyline in New Mexico. With 6 buildings over 200 feet (60 meters), you should absolutely take the time to enjoy and take pictures of Albuquerque’s skyline. To make that easier, we’ve made a list of the 4 best views of New Mexico’s biggest city, ABQ.

If you’re willing to pay and want to have an awesome experience while enjoying a breathtaking view, taking the Sandia Peak Tramway might be the best choice for you. You will be able to see and take pictures of the mountains and Albuquerque while the aerial tramway will take you to the top of Sandia Mountains. If that’s not enough for you, you’ll be able to enjoy great cuisine at Ten 3, a restaurant located at the top of Sandia Peak. Visit the tramway’s website to find more about pricing.

Kiwanis Cabin is an old limestone cabin built in the 1930s on top of the Sandia Mountains. It is accessible by hiking around 0.8 mile (1.3 kilometers) from Sandia Crest (our #1 view in Albuquerque). By going to Kiwanis Cabin, you’ll be rewarded for your hike with a fantastic view of ABQ. If you’re a photographer, the hike is also for you, because it will give you access to a lesser known viewpoint, as Sandia Crest is often the only spot where photographers go.

While this might not be meant to be a lookout point, it is one of the best place to go to to see and take pictures of Albuquerque’s skyline outside of Sandia Mountains. As the infamous Route 66 goes up a hill as it goes out of ABQ on the west side, we can sometimes have a clear view of the city and its buildings, especially around the West Central Route 66 sign. Because of that, we think it’s a great picture spot, especially for photographers, because the buildings are much closer than they are at Sandia Peak. We recommend going on the Route 66 and stopping where you’re allowed to park and where the view is great. Here’s directions to the area where the view starts to be interesting for pictures.

The best scenic viewpoint in Albuquerque is Sandia Crest. The peak is located at about a 50 minutes drive from downtown, but the view is absolutely worth it. The 10 000 feet-high (3200 meters) peak offers visitors a beautiful view of Albuquerque and its surroundings. The lookout point features a beautiful viewing area, a shop, a visitor center and is the starting point of plenty of trails. You can go there by car, by foot (if you’re really into hiking) or even take the aerial tramway for a magic experience.

If you pass by Albuquerque or live in New Mexico, we highly recommend taking a moment to go see the beautiful skyline of the city. As you can see, 3 out of 4 scenic lookouts featured on our article are close to each other, so it’s the perfect opportunity to see them all and have a great time and obviously take great pictures. Make sure to check out our scenic viewpoints map to see the best views in your area or in cities you plan to visit!