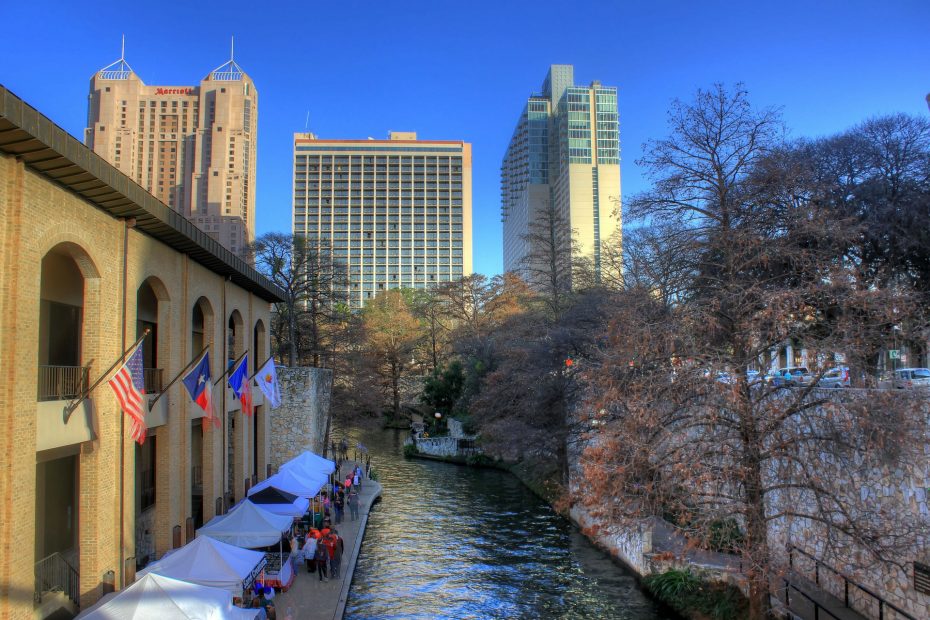 San Antonio is a beautiful city in Texas with a population of 1.5 million people. It is often overlooked as a tourist destination because of the popularity of Houston, Austin and Dallas, 3 big cities located in the same state as San Antonio (Texas). However, San Antonio is a great tourist destination and its skyline is pretty impressive with over 16 buildings over 85 meters (279 feet). Due to Texas being pretty flat, it can be tough to find a great viewpoint to see San Antonio’s skyline, but we’ve put together a list to help visitors and locals find the best viewpoint of San Antonio.

#3: The Bridge on Stadium Drive

In third place, we picked a viewpoint mostly for people who just want a clear view of San Antonio to take pictures of the city. The viewpoint (click here to see the exact location) is a bridge on Stadium Drive that crosses the McAllister Freeway, so it was obviously not designed to be a lookout point, but due to the highway, areas near the bridge offer a perfect view of San Antonio’s skyline for pictures, especially at sunset. It is located close to Alamo Stadium, so if you pass by to see a game, you might want to look around this spot to take a nice shot of the city.

Hays Street Bridge is a pedestrian/bicycle bridge near Downtown San Antonio. Due to its elevation and the highway next to it, people can have a clear view of San Antonio’s skyline and take better pictures. Crossing the bridge is free, so if you’re on a budget and you want to take a great picture of the city, it’s probably the best lookout spot for you due to its proximity to downtown. The only downside of this viewpoint is that some people might call the bridge’s area “sketchy”, so people who don’t know the area should definitely do their own research before going or at least apply basic travel safety tips.

#1: Tower of the Americas’ Observation deck

Finally, the best viewpoint in San Antonio is the Tower of the Americas. The 750 foot-tall (229 meters) tower offers the best view of San Antonio, by far, as its viewpoint is up in the air, so the view is much clearer and there is no tree or building in the way. The tower has an observation deck, which is the best for people who want to take pictures of the city, but it also has a restaurant, where people can eat while enjoying the view. We highly recommend visiting this observation deck if you’re in San Antonio, as it is by far the best lookout point of the city. Visit the tower’s website for more information.

While there might not be a ton of lookouts and viewpoints in San Antonio due to the flatness of the region, there are still places where people can go to enjoy the city’s beautiful skyline and take great pictures, such as the Tower of Americas. Therefore, anyone visiting or living in San Antonio can and should visit at least one of the viewpoints listed on our list to make sure to have a great time. Also, make sure to check out our world map of scenic lookouts and bookmark it for your upcoming trips!